Lebron James: The Making of an MVP 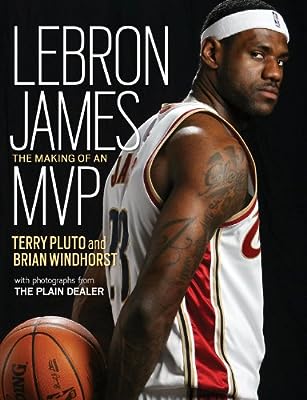 Price: $15.95
Buy Now from Amazon
Product Information (more info)
CERTAIN CONTENT THAT APPEARS ON THIS SITE COMES FROM AMAZON SERVICES LLC. THIS CONTENT IS PROVIDED 'AS IS' AND IS SUBJECT TO CHANGE OR REMOVAL AT ANY TIME.

#1 draft pick . . . Rookie of the Year . . . All Star . . . Olympic gold . . . Most Valuable Player-- Cleveland Cavaliers player LeBron James has had an exciting ride to superstardom. This book, by Cleveland Plain Dealer sports columnist Terry Pluto and NBA beat writers Brian Windhorst, takes a close-up and thorough look at the forces that shaped LeBron into an MVP.
Pluto and Windhorst have covered the LeBron phenomenon closely from the start. Drawing from a decade of reporting and scores of personal interviews, their new book provides an inside look at each stage of LeBron's development--how his childhood shaped his personality and sparked his drive to succeed; how budding stardom in high school challenged him to grow up fast; how his first steps in the NBA weren't always easy; how he quickly grew into a forceful team leader in the NBA and on Team USA; and how he now works relentlessly to improve his game.
The book has been nominated for the American Library Association's "Quick Pick for Reluctant Readers" (2011).

LeBron James: The Inspiring Story of One...

LeBron James - The King of the Game